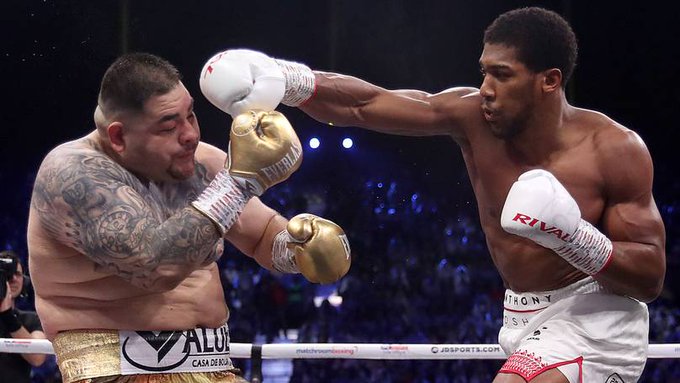 Joshua’s boxing career was on the line had he lost this fight, and he is happy for things to have gone his way.

In the tense and much-anticipated match, Ruiz did not land any decisive or hard-hitting punches consistent with everyone’s expectation.

The scores in the final analysis were

AJ’s victory has seen him reclaim the IBF, WBA, and WBO back to the UK

Andy Ruiz has hinted to a third fight admitting that this time around he was a bit too heavy.

Reacting to AJ’s win, the WBC belt holder Deontay Wilder blasted Joshua for not being brave enough to confront and engage Andy in a fierce exchange.

“Joshua did what he had to do to get the win. He ran around the ring and was on his bike all day.“

He observed that Joshua had numerous opportunities to floor his opponent and finish the game, but for some reason, he couldn’t do it.

“Fans come to see knockouts. They come to see something dramatic, a body lying on the canvas, spread like it’s having birth. That’s what people want to see, and that’s my mentality, he said”.

So, who is Joshua’s next opponent, and is he ever going to fight Deontay Wilder? Well, after his victory over Ruiz, AJ said that he is ever ready to face Wilder for a unification bout. However, Wilder was quick to dismiss any prospects of a unification bout soon claiming that he’s too intimidating and dangerous for champions like Joshua.

“They couldn’t say anything about fighting me. They couldn’t mention my name. They went around me. I’m too dangerous. You’ve seen what I do in the ring. I don’t play around.